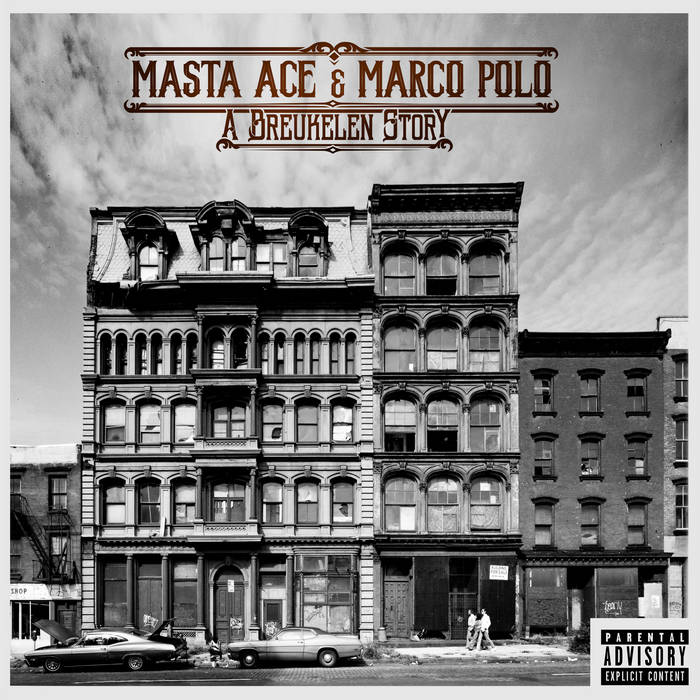 Valur Páll Valsson This is just so good!

Jesse Markus This shit is hot! Reminds me of Gang Starr but Ace is a better rapper than Guru. Marco's beats are straight gas. Gonna bump this forever. Fight Song feat. Pharoahe Monche is just icing on the cake. Cop this shit now!

On 2007’s “Nostalgia,” a memorable track off Marco Polo’s album, Port Authority, chemistry between Polo and guest MC Masta Ace is easily heard and felt. What was a quick one-off collab was not only a reminder of Masta Ace’s timelessness, but it was also the impetus for a larger, more fleshed out concept between the Toronto beatsmith Polo and the legendary MC. The pair since formed a duo and the result is a powerfully evenhanded project, A Breukelen Story.

In 2018 we find hip-hop’s storied journeyman, Masta Ace, at the helm of another sharp, tightly wrought project. He’s traversed hip-hop’s ever-changing landscape for nearly three decades, navigating different eras while expanding his already extensive catalogue. From his formative work with the legendary Juice Crew, to a bombastically renowned stint with Delicious Vinyl, it’s hard to find a more humble master of ceremony than Ace—even harder is finding another figure whose work is equally embraced on both coasts, East and West, as well as abroad.

Despite amassing 7 solo albums, 5 collaborative projects and countless additional one-offs, Ace is still trying to show and prove, still moving the needle forward for himself, his fans, and his career. Says Ace: “My goal on A Breukelen Story was to do more lyrical stuff. I’ve done a lot of concept songs, and a lot of topical records, but I made a point to put a couple straight rhyming joints on here to remind dudes I can still do this.”

“I met Masta Ace for the first time while interning at Cutting Room studios in Manhattan,” says Marco Polo, longtime Canadian producer whose exploration of samples and boom-bap aesthetics certainly suite his moniker. “Ace came in for a session in the studio years and I introduced myself and gave him a beat CD.” While Polo was a young intern on the rise, he quickly worked the situation to his advantage, eventually producing for giants he grew up admiring— Kool G Rap, Large Professor, Scarface, Sean Price, Black Thought, Talib Kweli, to name a few.

Polo is not new to forming quality collabs with others in the art form, with notable stints on the aforementioned Port Authority as well as it’s follow up, PA2, and others like 2016’s work with young MC, A-F-R-O, fittingly titled A-F-R-O Polo. Yet out of Polo’s previous collaborative efforts, this one stands out and is a bit more special, according to Polo: “Ace does not like to write random songs, its usually conceptual and topical,” he says. “But we do have some straight spitting joints on A Breukelen Story which is what makes this album possibly the most diverse of all of my collaborative albums.”

The random meeting and a beat CD resultantly birthed A Breukelen Story, a collaborative release between the venerable veteran and an incredibly detailed and prolific producer. 14 tracks with pronounced guests (Pharoahe Monch on “The Fight Song” for example) all strewn together through Ace’s signature skits and interludes that frame the music and while telling the story of Polo manifesting his vision of being an NY transplant via Toronto while pursuing his dream of being a renowned record producer. Other guests range from younger MCs like Marlon Craft to spry OGs like Lil Fame (of M.O.P.), to Smif ‘n’ Wessun, to Styles P (of the Lox) Polo’s pastiche style boom-bap is the drum-driven centerpiece that perfectly couches Masta Ace’s thoughtful stanzas and vivid storytelling for this effusive Brooklyn narrative.

outré black metal, with a Victory Over the Sun interview and music from Liturgy and Jute Gyte.