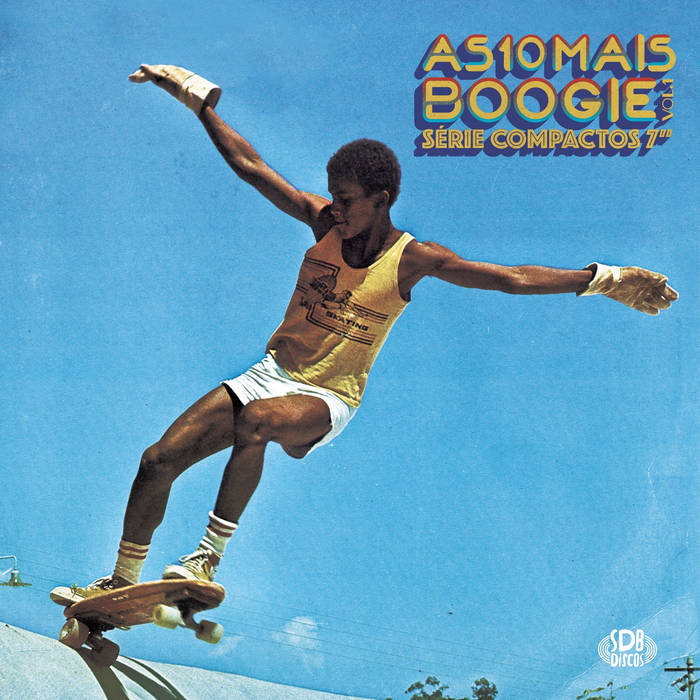 What exactly is Boogie? Is it a genre, an era, a style? Colours, clothes, textures are all part of its make up. Boogie is the "top shelf" music of the 80's. Anything from this era that brings along Moog synths, vocoders, DX7s, or triggered Oberheim drum sounds, is Boogie!

Brasil has a huge archive of underground dance-oor heat. Dierent styles of music ranging from Macumba to Samba, MPB to Pop, Electro to early Hip Hop, were all stung by this Brasilian "Boogie Bug", cleverly orchestrated by geniuses of the style; Robson Jorge, Lincoln Olivetti, Junior Mendes, Mister Sam, Sergio Sá, to name a few, were the backbone of uncountable projects by big names of Brasil´s pop and underground music scene during the 80´s.

This compilation brings together a bunch of non-obvious "compactos" (33 RPM 7" singles), most of them, promos, which never saw the light of record store shelves, but instead sat for years in the dead-vaults of radio stations or ended up in second hand shops, ea markets, church basements to junkyards.

We, SDB Discos, are excited to put together this eclectic selection inspired by the nest in Brazilian 80's music. In this compilation we gathered 10 rare Boogie Hits from very well know maestros of the genre such as Tim Maia, Cassiano, Tony Bizarro and other underground artists like Elizio de Buzios with his only recording, the funky boogie joint "Tamanqueiro", Gaby Whiskadão featuring the disco hit "Super Amor", the B-Boy Crew Electric Boogies with their very fresh early 80´s rap hit "Break Mandrake" as well as the very obscure group called Let´s Dance featuring their version of "Riguera" sung in Portuguese entitled "Dance com a Gente".

Even after so many years, Brasil's most obscure boogie gem is yet to be found on a long diggin' session thru thousands of records full of weird looking haircuts, somewhere near São Paulo or Rio de Janeiro. This project is dedicated to all the "Boogie Heads" doing what they do best, keep searching!

Guests include Kassa Overall and Muriel Grossman, plus an LP of the week by Van Hunt.